I think it's safe to say that it's been many years since any renovations have been made here, despite coming under new management at the start of the summer; that's a mixed blessing, I guess. The bathrooms are starting to pull apart at the seams, the acoustical tiles are sagging with 'atmosphere' and other guests seem to be dining mainly on Miller Lite, judging from what they were hauling up the elevators last night. It looks like the hot tub is where most of the action is going to be, judging from the clientele and various Yelp reviews of the place.

But at the same time, the lobby and restaurant are sort of charming, with a 60s suburban den sort of decor, which is to say 'dark wood-panelled to the nth degree.' Seafood is served Calabash-style (meaning 'battered and fried' I think, and named after a town in NC), and if you're in a big hurry to be somewhere after supper, forget about it. The food comes when it and the server are good and ready. There's also a bar here in the building somewhere, but I've yet to see it.

And we come for the sand and the water anyway. The fears that Hermine would be potentially wrecking our time here have abated with the bright sun and tide. Only one question: when did it become acceptable to bring your portable speakers out to the beach, to serenade everyone in earshot with Today's Hot Country? Doesn't work for me, sorry. The waves are the music I most want to hear here.

I managed to throw my back out right before we left Durham. So I've been hobbling around on my great grandfather's cane, living on ibuprofen and half-cut iced tea. I'm trying not to spoil the vacation for anyone else, but it has put something of a crimp in my enjoyment of the beach proper (hard to negotiate sand with a cane, I find). But that's okay, there's reading to be done, and I'm truly digging A Pound Of Paper: Confessions of a Book Addict by John Baxter, in which guitar-god-turned-antiquarian-book-dealer Martin Stone plays a pivotal role. 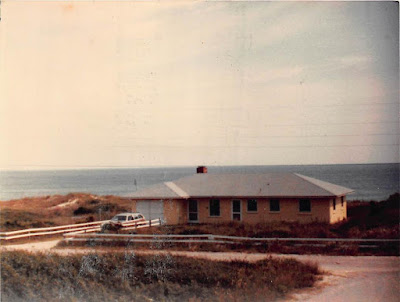 Pine Knoll Shores is just down the island road from Salter Path, where my parents owned a house for many years. It was a sweet little cinderblock rectangle, painted bright yellow, and my parents loved going there to fish and shell and generally relax. It had three bedrooms, a living room/kitchen area, a bathroom and a tiny screened porch that looked out over the Atlantic. They finally sold it when it became too much work to keep it up--the stairs down to the beach were inevitably thrashed and trashed by hurricanes, requiring rebuilding every year; and renters were often inclined to leave damage or messes or take things that belonged to us.

Every year, my dad took pictures of the house from every imagineable angle, and every year, the encroaching condo world of Pine Knoll Shores loomed larger and larger in the background.

That was probably the last place my mom and dad regularly left home to visit. I never got to spend as much time there because the time that they owned it was mostly after I was out of the house and in the throes of early adulthood.

We drove down Hoffman Beach Road on our way in yesterday to discover that the house was still there, albeit upgraded significantly. It's been extended in both directions, and there's even a garage built on in front of the old garage. It appears that the previously unmowable yard gets mowed with regularity nowadays.

Part of me wishes I could go say hello to whoever's there, but I sense it'd be a renter and I'd freak them out and invade their privacy, so I won't. But it makes me happy to know that our little bungalow has lived on in spite of the build-up of the whole island. My parents would be pleased as well, I think.

I wish you all a happy Labor Day weekend, and I hope it's as sweet as ours has been so far. We get to make our own memories and relive some old ones, too, even if we have to hear the lilting tones of Luke Bryan from a few chairs down the row... 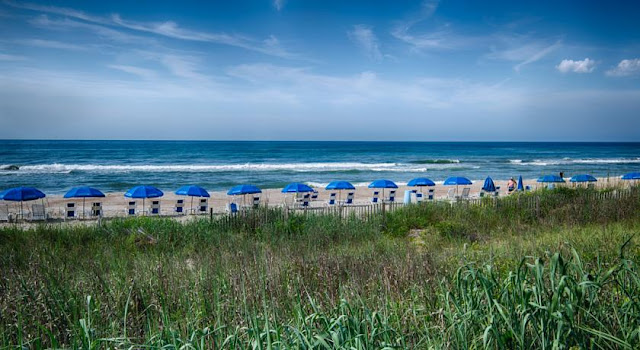