Dennis Linde - Under the Eye 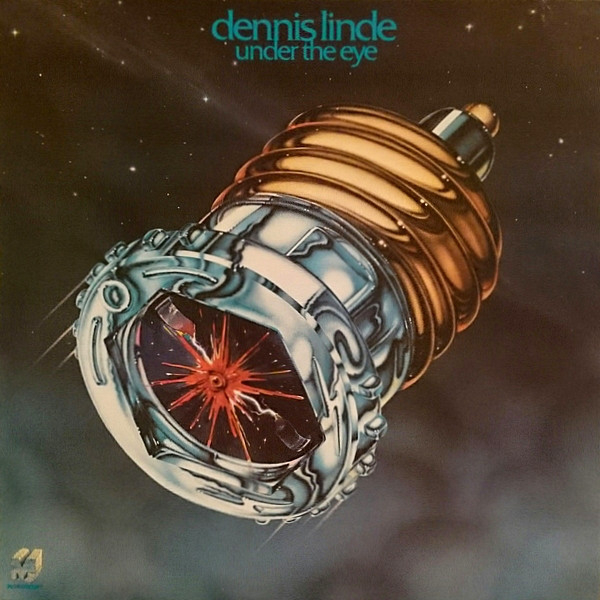 So you know how sometimes you get the feeling you're finally going to find the one thing you've been looking for forever on this very day? You've looked high and low, bypassing the obvious eBay route where it lies, overpriced and miles away. You've gone to every store at least twice, asking the snotty clerks who neither know who you're talking about nor care a fig. Months of this behavior can make one feel desperate or even a little crazy--does it still exist? Is it as good as I remember it being, or am I delusional?

When you finally do run across that copy of Under the Eye, Dennis Linde's 1977 release on Monument Records, you stifle a little yip for fear that the hippie guy at the counter might hear you in time to add another number to the left of the price. Because the price is SO right, especially considering what the record goes for on eBay.

Today was that day.

Dennis Linde, as you likely know, wrote "Burning Love," recorded by Elvis Presley, the King's last top-ten hit. He wrote "Christmas Eve Can Kill You" by the Everly Brothers. Dennis also wrote "Goodbye Earl" that was a Dixie Chicks standout cut. And he wrote and co-wrote dozens of other songs for country artists like Alan Jackson, Roger Miller, Arthur Alexander and Billy Swan, none of whom had any problems writing great songs of their own.

Under the Eye was an album that came into my life courtesy of the cut-out bin at the Musical Maze record store in Manhattan. With its bizarre cover featuring an outsized old-style fuse hurtling toward Earth, the album didn't exactly cry out as a natural listen. But the first song on side one was "Down to the Station." Linde's version of his B.W. Stevenson hit. Just didn't sound like anything I'd heard before, not even B.W.'s take; it was full of little tweaky sounds, tiny funky guitars, cheesy synth bass, loads of backing vocals. All of these things made me sit up and listen. And I loved it. I played that song over and over again, absorbing the minutiae.

The rest of the album was as adventurous and dizzying: "There Goes My Heart Again" had a celebratory, nearly bombastic chorus; "The Good Ship Rock and Roll" was an anthem in search of a larger audience; his take on "Ghost Riders in the Sky" was nothing short of insane.

As with so many of the records I collected over the eons, Under the Eye and a couple of the other Linde solo albums I'd collected disappeared. Probably either in a big purge before a move or possibly as a Katrina aftereffect, all I know is it was gone. Then the turntable was no longer a part of my stereo systems, and no Linde records ever made the leap to digital, unfortunately. (When I become king of the world, I will make sure that some sort of anthology by Dennis Linde will become available as one of my first beneficent acts.)

I've spent the last couple of years waiting for this day, and I'm happy to report that Under the Eye is still the breathtakingly weird and wonderful experience I remember it being. Linde died almost ten years ago, but his music retains the maverick goodness that made it so fine in the first place.

Hon Don Gerard said…
I wonder if this is one Geoff Merritt at Parasol might consider hunting down & reissuing...
September 11, 2016 at 9:27 PM