On Sunday, The dB's took the stage at the Haw River Ballroom in Saxapahaw NC as part of Stand Against HB2 - North Carolina Musicians United for EqualityNC and QORDS. Because there were so many musicians participating, short sets were the order of the day.

It was the classic line-up of Chris Stamey, Gene Holder, Will Rigby and me, aided and abetted by Brett Harris. Gene flew in for the gig and returned to New Jersey later that day.

We were introduced by Senator Mike Woodard, Durham's state senator in the NC Legislature and a staunch opponent of House Bill 2.
Here's a picture from after the show of Will and me with Senator Woodard and his wife, Rev. Sarah Woodard. 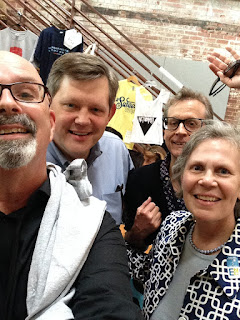 I wasn't able to stay for the entire show, but I did get to hear:

Tres Chicas - a family favorite with gorgeous harmonies and general happiness radiating from the stage. 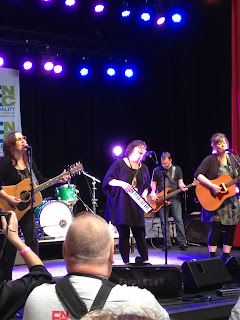 Skylar Gudasz - another friend with a glorious voice and songwriting chops whose Oleander album is in steady rotation around the house.

John Howie Jr. and the Rosewood Bluff - stone country with that deep, DEEP vocal, and a surprise version of "When You Were Mine" by Prince. 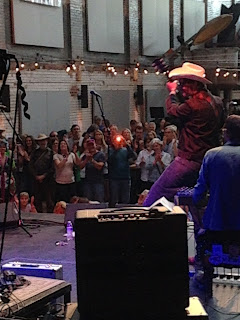 I also got to join in with Jon Heames' Secret Surprise directly after our set, where I shared the mic with Howie, the Chicas, Chip Robinson, Robert Kirkland and a host of others, all singing "All You Need is Love" with the cats from Yeaux Cats providing the backing.

It was a fine and beautiful day, and a good time was had by all. Mike Allen, Heather LaGarde, Rod Abernethy, Phil Venable, Angie Santiago and everyone else put so much effort into making the day run smoothly and help this worthwhile effort to raise awareness of the injustices in HB2. The dB's were proud to participate.

Bebe said…
Thank you so much for lending your voice to this cause! Music makes everything better, and am grateful to have so many wonderful artists working for positive change in NC!
May 16, 2016 at 8:23 AM