December 26, 2010
This post comes to you over half a year since the last one.

Much has changed, mostly for the better. 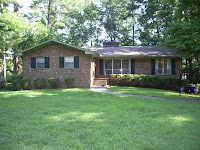 I have all three of my beautiful children here with me in the house we bought this summer. My Smart Wife is poking around in the kitchen, preparing to cook a roast for the evening meal. There's about five inches of snow on the ground here in Durham. I have been working at a new job at the Durham Performing Arts Center as a ticket salesperson; I'm also able to help with the construction of emails and website entries.

Musically, I've been a little less active than in the past. The dB's album is not finished yet, six years on. We work on it when we can, but everyone has busy schedules. Will and his family have relocated here from Ohio, and that should make forward motion more plausible. Luego continues to record and play, and I'm called upon when I'm able to perform with them. I took on bass guitar duties with a local children's music band, Baron Von Rumblebuss and the Redd Zeppelin. That's been great fun; Smart Wife also constructed a fab outfit for shows.

Most exciting is the continued and thriving existence of the Radio Free Song Club. They've posted nine shows so far, but I've sent in a dozen songs now, each under the monthly deadline. Some of the new songs are just passable, but a few of them are really good, in my humble opinion. My colleagues' tunes are great impetus to create and do it well, never in any competitive sense but only as a personal best/quality control manner. I'm thrilled about RFSC and hope you all have been listening too.

My usual M.O. would be to apologize for not posting more and promise to be better at it; I think I won't do that this time as it seems grossly insincere, having done it many times here. Instead, I will say that I plan on being more organized and more career-focused in the year 2011 and will try to make this hangout a better place for you to see what I actually am doing.

Happy new year to you all!

Tom L said…
Thanks for the news, Peter!
We wish you continued success and happiness in 2011 and beyond.
-Tom & Patrice in St. Louis
(friends of Bob Aquadro and Helen Hodgekinson...we saw you again at the Wood House Concert you did with Chris)
January 4, 2011 at 11:45 AM

Russell said…
Peter, was just thinking about you yesterday. Glad to see you have music projects in the pipeline. Happy New Year!
January 8, 2011 at 1:33 PM

mauka makai said…
love this post peter. also, I did not know that you all moved. Guess I should stop waiving to you all when I drive by your (old) house on Duke Street?
-yvette
June 10, 2011 at 12:49 AM