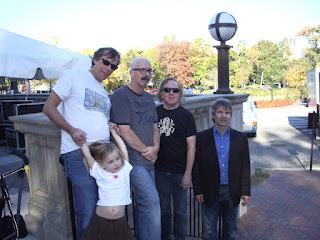 Wow, what an amazing day! Mac McCaughan of Merge Records and Superchunk put on a massive show at Graham Terrace today in Chapel Hill to draw people in for the last Early Voting Day.

Orange County, unlike much of NC, decided not to extend the voting hours 'til 5pm. So there was a lot of activity from 9am until 1pm at Morehead Planetarium where the actual early voting was taking place.

At 9am, Portastatic started the day's festivities. Mac told me later on that at that hour "my hands were freezing."

The starting lineup of artists included Regina Hexaphone featuring the lovely and talented Sara Bell, and one of my favorite soulful singers, Greg Humphreys of Dillon Fence and Hobex who has a new solo album out called Trunk Songs. I didn't make it to the gig in time to hear anything from these fine artists, unfortunately, but the family deserved a pancake breakfast and I finally felt well enough after three weeks of walking pneumonia to oblige them.

As I got there, the sounds of the Bowerbirds greeted me. I'd seen them at a craft fair/rock show at Tir Na Nog several years ago, and they've hardened their sound somewhat (although a twenty-minute set is hardly enough time to determine whether there's a shift like that truly happening).

I was also greeted by a bunch of Will's and my old friends including Richard Clodfelter, visiting from Germany where he's lived for a long time, directing and acting. Richard was a high school compatriot, always a part of the Little Diesel web of intellectual nuts, and his visits to the States are rare. I'd had to miss a party in his honor at the onset of the walking pneumonia, so I was really glad to see him, as well as Alex Bee, Bill Hibbits, Tom Robins and former Sneakers/H-Bombs bassist Robert Keely. It's the nucleus of my best friends throughout high school, and I'm grateful to still feel that kind of comradeship between us.

Here's a picture of some old pals that I'll treasure forever. 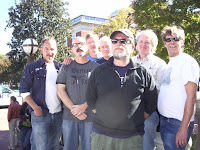 Another old pal that showed up was Rob Ladd, best known locally as the drummer for the Pressure Boys. Rob also played drums with Don Henley and Alanis Morrissette, as well as the Red Clay Ramblers and Don Dixon. Hell, he was even the drummer for the Continental Drifters for a spell. Rob's moved back to the area, and it was really great to see him and chat for a bit. 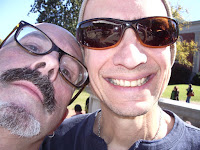 Other combo notables who were in attendance were Kitty Moses from the X-teens, Alex Maiolo, Lynn Blakey from Tres Chicas, and my new bandmate Patrick Phelan from Luego. Many generations of Triangle area rock were represented, and it was great to see.

Billy Bragg, who I'd met years ago when I played with R.E.M., agreed to come over for a short set. He played a full concert tonight at Duke University, but his twenty minutes were filled with great songs like "Sexuality" and a tear-inducing rendition of "Save the Country" by the late Laura Nyro. He reminded the audience that the potential of electing Barack Obama as president was a great indicator to the rest of the world that the US population is not a mirror of the administration of the preceding eight years; and Billy rightly noted that, if Senator Obama is elected on Tuesday, that November 5th is the day that the real work begins here, trying to band together to fix what's wrong and seeking a collective vision that we can implement in the future. Billy is very inspiring to listen to, both as a singer and as an orator. (It was packed and I couldn't get a good picture of him, sorry.)

Ivan from the Rosebuds, another Merge act, played his sophisticated pop songs acoustically as his bandmate Kelly looked on from the audience. A makeshift choir of musical friends augmented his performance toward the end of his set, adding a serene set of harmonies to some already beautiful music.

Mac and Jim Wilbur were the acoustic Superchunk (Jon Wurster was out on tour with the Mountain Goats). Another short but powerful set of gorgeous music from our host, whom I believe could run for Governor of North Carolina and probably get elected, given his natural ability to motivate people and pull them together. I'd be first in line to vote for him.

Then it was our turn. Gene Holder could not come down for this show, so our one of our dearest friends and most talented musicians, Mitch Easter, stepped in and substituted on electric bass with The dB's. Chris and Mitch have been best friends since they were tiny, much like Will and myself. And I've always been in awe of Mitch's guitar playing (the irony of me playing lead guitar while my early idol is holding down the bass beside me was not lost here) as well as his writing and production work. In some respects, Mitch has always been in the fold anyway, so his debut with the band in 2008 was as natural as could be imagined.

We did the longest set of the day for those who stuck around after the polling place had closed. My recent illness had me somewhat apoplectic that my voice wouldn't survive a set of loud rock, but the Infinite Healing Power of Rock and Roll gave me the strength to sing hard and clear. Hooray!

Our set was:
Big Brown Eyes
Dear Valentine (new from Chris)
Amplifier
Shapes of Things (a Yardbirds cover during which I got to be Jeff Beck on for the solo!)
V.O.T.E. (from Chris' record with Yo La Tengo, all thirty seconds of it)
That Time is Gone (new one of mine)
Send Me Something Real (new from Chris)
Neverland
Clever (new from Chris)
Ask For Jill
Excitement (from one of Chris' solo albums, although The dB's had learned it prior to his departure in 1983) 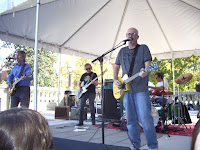 I felt that we played a fun, loose and entertaining set. Mitch was flawless. Will was the engine room, as usual, keeping the songs right in the pocket. Chris looked like he was having a great time, too.

People used the word 'shredding' to describe my lead guitar playing, which I believe is considered a complement in the vernacular. 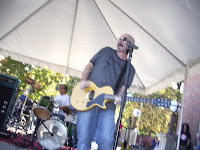 Me, I just wailed and swung around with my Les Paul Junior like I was nineteen years old again. I felt free and enjoyed the company onstage and off on a day like no other.

You shoulda been there....

Barry said…
You shoulda been there....

i was. you guys rocked.

Tony Plutonium said…
You, sir, were a rawk god - shredding is the least of the superlatives I would use in describing your guitarosity.

Great set and a great day - I managed to catch at least a couple of songs from each performer and it was all good.

BTW, wasn't Deep Jonah ("now that Jonah has swallowed the whale") in Graham Memorial? Was I the only person not on stage old enough to remember that?

Will be posting Billy Bragg photos (and others) in the next day or so at half-lifeandtimes.blogspot.com.
November 2, 2008 at 5:59 PM

Jeff Hart said…
it's rare to see all these rockers in the daytime! what a treat. saw mitch's gravel truck a week or so before at the cave and the dB's just days later. what a day. thanks for doing this guys.
November 3, 2008 at 4:26 PM

roscoe said…
wow!
Looks like Will got to keep his Dukes Drumkit!

Kevin said…
I thoroughly enjoyed the set Saturday. I had never seen The dB's play and loved it. The music reminded me a bit of Big Star. I hope you don't mind the comparison.

I posted some photos from the show on at trianglemusicblog.com.
November 7, 2008 at 7:20 AM