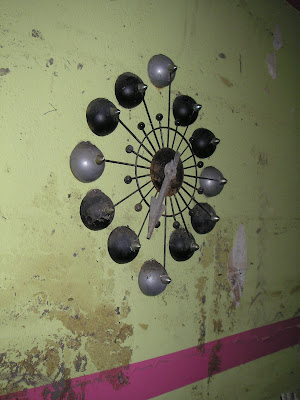 Yesterday was a weird, hard day.

I had done my first gig subbing for Brandon Bush in Sugarland in front of forty thousand Harley owners in Milwaukee without a soundcheck the day before, and I'd neatly butchered a lot of what should have been perfect unfortunately. Everyone was very understanding and comforting about it, but I wanted to sit in my bunk on the bus and weep, I was so distraught about it. 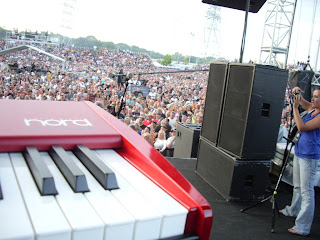 I'd also chosen my first day with a new band to quit smoking cigarettes again. The master of good timing strikes again... I sure hadn't planned on being a smoker again, after having been quit for ten years. But for the past three years, it's been on-again, off-again, with the last four months having been pretty much 'on' nearly to the point of chain-smoking. The last Hootie night was where I tried to smoke as much as I could to sicken myself, and I guess it's worked as this is my third smoke-free day.

Impending unemployment has been riding heavily on my shoulders. Hootie and the Blowfish has decided to hang it up, at least for several years, which means my job will also disappear. I had hoped to play with Darius in his solo country band, but his management had other ideas so that's not going to happen. I'd like to keep playing music, and the sub gig with Sugarland is allowing me to do that at least for a few more dates. After that, I don't know.

What I do know is that it's very difficult to look for jobs when you're watching "Ice Road Truckers" or "Deadliest Catch" or any of those shows that are so prevalent. You feel like a big sissy, unqualified to wrangle either a big fish or a big truck through a desparate situation. You look at the calluses at the ends of your fingertips from guitar playing and you think "how pathetic". No outdoor tan, no ruddy complexion, no bulging muscles and sinew. Just a fishbelly-white middle-aged bent-over guitar player who can type eighty words per minute.

The hardest thing about yesterday was that it dredged up a thousand Katrina memories all at once, while considering the oncoming Hurricane Gustav. It was the third anniversary of the storm that removed the life I knew from me, like it did to thousands of others. I was fortunate, others were not, in that I got a chance to restart my life far away. I had a choice to return to New Orleans but did not do so, not wanting to subject my wife and children to another possible life-endangering situation.

Our friends are scattered to the four winds. My ex-brother-in-law lost his life in the storm, leaving so many of us distraught and incomplete. What was our sweet home is just a grassy lot in St. Bernard Parish, unsold and overgrown. I visited with an old friend in Primm NV the other day who told me he didn't even visit his lot when he went to New Orleans last. "Why should I? What's changed?" he asked, and I had no answer. 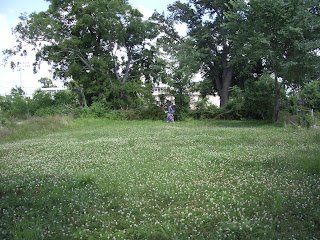 My daughter had to evacuate with her mother to Lafayette and now possibly to Atlanta.

It's all so encompassing and broad and depressing. It's paralyzing to watch happen again, and I certainly hope for New Orleans to avoid more cataclysmic damage.

Once again, the television is my window onto what's going on there, much as it was three years ago when I watched Katrina destroying my adopted city on the screen in the front lounge of the bus.

Today is a new day, another day, a day where I can try to right myself and move along (as I try to do most days anyway). Yesterday, however, stopped me in my tracks, and I'm glad it's over despite the presence of another potentially deadly storm.

:-D Shea said…
First I just want to say that you're in my thoughts. Second, yes do please stop smoking. Finally, I'm not sure how much encouragement you're looking for but for me at least I've found that major changes or disruptions are often great opportunities to see things differently. I'm sure you'll land on your feet and soon be busier than you ever expected.
August 30, 2008 at 4:33 PM

the sandwich life said…
my thoughts are with you. Change and remembrance of hard times can be difficult things.
August 31, 2008 at 6:07 PM

steffers said…
Peter...
My thoughts were with you and all when I heard about Gustav. I cannot even imagine the emotion, although your blog gives us a little insight. Concerning your "future", you are an extremely talented musician and you will find a gig that will make you happy and feed the animal inside. As a huge Hootie fan that travelled far and wide, it was an IMMENSE pleasure to watch you up there. I will leave my comments about what happened to you to myself...for now :)
September 3, 2008 at 12:03 PM

highschoolsw said…
P ~
You've been through a lot worse during your life - I've known you for 35 years and this too shall pass. You're not only an excellent musician, but now maybe it's time to take pen in hand and tell fans, folks your story. You are a fascinating person and a great writer also. My thoughts are with you ~~
September 3, 2008 at 3:24 PM

senormedia said…
We'd love to have you come play in Charleston at the Main Library sometime. Drop me a line if you are interested.

Unknown said…
Peter, I've seen you several times with Hootie, and got to hang out with you after a show just out side of Nashville. It was at a place called the Starwood Ampetheter. You turned me on to the db's got the album a few days later. Hope things go well with you, it's weird not seeing you and the rest of the guys, soni, mark, dean, and double g, behind darius whenever he's doing stuff for his country album. I hope for your sake, and the sake of Hootie fans, the break doesn't last as long as the papers are saying it will.
December 9, 2008 at 4:58 PM